When my wife gave me a Victorinox Swisscard   Lite Pocket Tool as a gift for no occasion, I was wondering whether she was actually passing a hidden message here. I was no frequent traveler, camper, hiker, fishermen, nor anyone you can imagine would need a multi-tool. Then why has she given me such a gift?

To be honest, I still don’t have an answer to that question, but I can tell you that this is the most useful gift I’ve ever got. The best of all is that you have a blade, scissors, tweezers, screwdriver or the pen in your wallet just in time when you need it. After a while, I catch myself gifting Victorinox Swisstool as a universal gift to my male and female friends equally. 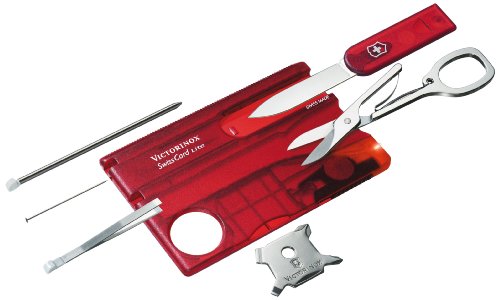 Things to Consider Before Buying a Wallet Multi-Tool

Every person in the world should be ready for unpredictable situations. Such a need is even more emphasized if you travel a lot or if you are a nature lover and you like to perform various outdoor activities.

You dream to have a knife, scissors, tweezers, a screwdriver and some other useful tools available whenever you need them. And now you imagine carrying around 10 and more ponds around the world. You tried with the Swiss Army Knife, but you still find it too bulky. If I tell you that you can have all that literally in your pocket than there is no excuse not to get it.

Therefore, there is no discussion whether you need a Swisscard Pocket Tool   or not. The only discussion we can have before buying it is what tools it should contain.

Most of the tools have a blade, screwdrivers, a pin and a pen. Where they differ is whether they have scissors, nail file, toothpick, tweezers, light and magnifying glass. Or whether it has a screwdriver of 3mm or 5mm. And all these things are really up to your needs.

I personally find scissors and tweezers a must have, while I don’t find nail file or a toothpick so useful. However, if your nails are thin or you have tooth pockets in your mouth then it would be nice to have a nail file and a toothpick with you. But as I said – you are the best to address this question.

Victorinox Swisscard Lite Pocket Tool   comes as a third model of a Swisscard multi-tool and is considered to be the most sophisticated version. Its measurements remained the same as the previous models, which means that it fits easily into your pocket. It is bit heavier though, due to a battery cell that powers a LED light. However, it still weights approximately 1 ounce, so you won’t feel a burden.

Swisscard is the innovation by Victorinox firstly introduced in 1997 and thus has been around for more than 20 years.

Swisscard Lite Pocket Tool is the latest and most sophisticated version of a wallet multi-tool. This version has 13 functions:

What I love most with Swisscard is that I can put it in my wallet and forget it’s there until I really need it. It’s about as thick as four credit cards stacked together.

I find it most useful when traveling, although I have to mention that you need to be careful at the airport. Some of my friends that received the Swisscard from me as a gift, complained that the knife was taken by the airport security. On the other side, when I forgot to take the blade out at the airport, nobody has asked me anything. There is, obviously, no rule to what can happen to you at the airport, but I’d advise you to keep the knife out when travel by plane.

I experimented with the tools since I personally didn’t find a pin useful at all. I was actually wondering why Victorinox included it in the set. Then I figured out that you can take the pin out and replace it with a needle, so whenever your pant needs fixing, you can do it easily. Useful tool, particularly when traveling.

Swisscard Lite Tool   comes without toothpick and nail file. If this is something that you find necessary to have with you, then you might consider some other options of the Swisscard.

It’s worth mentioning that Victorinox guarantees all knives and tools to be made of first class stainless steel and also guarantees a lifetime against any defects in material and workmanship.

Lite Pocket Tool’s red color and credit card look make it a posh looking item in your pocket. Its design totally supports its functions, so no one can say that Victorinox sacrificed functionality on behalf of design. It’s compact and sturdy.

If I tell you that it is a 2004 winner of Reddot design award for its design quality, innovation in form and function, that you get a proof of what I’ve just said.

The biggest innovation that Lite Tool brings is a LED light. Early versions of the Swisscard Lite Tool   came with a red LED. While red right can be of advantage in some extreme situations, it is extremely hard to make out your distance to a source of red light. Identifying this weakness, Victorinox made an advanced version that comes with a white light. A white light now shines with the power of 18 Cd (in comparison: light of a regular candle: 1 Cd). It gives you a decent light for your day and night adventures.

Another new feature of the Lite version is a magnifying glass, operating with a five times magnification. Maybe it does not sound like a necessity, but once you have it, you would be surprised with its benefits.

Caution if you plan to start a fire with a magnifying glass. Although this could potentially be a lifesaving feature, bear in mind that Swisscard is not created to be a surviving kit.

Interestingly enough, there are not a lot of alternatives to Swisscard. As previously mentioned, the Swisscard itself comes in 3 versions, so we can only compare the Lite version to its predecessors – Swisscard Classic and Swisscard Quattro. 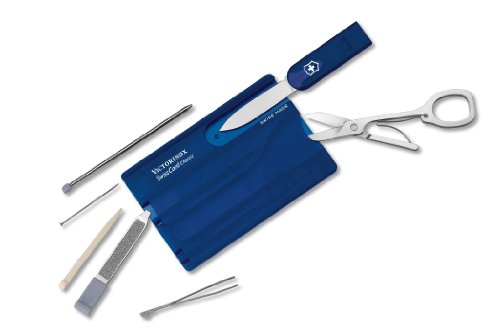 Swisscard Classic   is considered a basic version of the card. It is the same dimensions, but it features 10 functions. In comparison to Lite version, there is no LED light and magnifying glass, while it provides a basic version of a screwdriver. It’s certainly a very good choice if you don’t need these functionalities, but considering that the prices difference is insignificant, my advice would always be to go for a Lite version. You never know when you might need additional features. 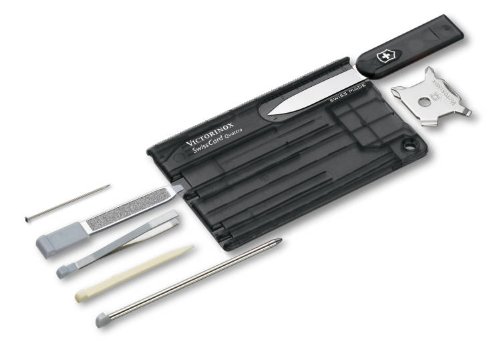 Swisscard Quattro   is an advanced version when compared to Swisscard Classic, but still less sophisticated than Lite. Quattro model features a total of 13 functions, which is three additional functions more than in the Classic version. To sum up the changes, scissors are replaced by a miniature screwdriver set that features two regular and two Philipps screwdrivers.

Apart from that, all other functions remained the same as the Classic. All measurements and the weight also remain the same.

As a special feature the Quattro model comes with a hole for a lanyard in the lower right corner of the yard. It is thus no longer limited to carrying it inside your wallet but can be attached, for example, to your keys. This feature makes it one of the best keychains tools on the market.

When we eliminate Victorinox as a manufacturer, there is really not much left on the market. There are some survival multipurpose tool kits on the existing, but this is not what Victorinox had in mind when creating a Swisscard. Therefore, any comparison to them would be misleading.

To conclude – even if you don’t think you need a Swisscard Lite Pocket Tool, I recommend you get one. It’s really affordable and worth investing. Once you get it, you will realize that you actually need it. Having it in your wallet will not make you a pain with carrying around and you will find it useful on numerous occasions.

Earn Some Extra Money On The Side Source: http://www.huffingtonpost.caIf you’re looking for ways to make extra money, there’s  are a lot of easy ways and you can start now! Whether you want to do something like sell things around your house, run errands for other people, or do different projects online, we have 12 great […]

The Best Jobs To Get You Financially Motivated Source: amazonaws.com[the_ad id=”1142″][the_ad id=”1473″] Are you ready to swim in money? If you’re looking for a lucrative job with great financial perks and rewards, then there are a lot of great positions out there! While we know that hard work pays off, sometimes it helps to land a […]

Sean Michaels – $17 Million Net Worth Source: vox-cdn.com Whether you like him or not, every true wrestling fan at least knows of Sean Michaels. But let’s be honest, the vast majority of fans love him. And with good reason – he didn’t earn the name “Showstopper” for nothing. He truly was one of the […]

The Perfect Guide To Wet Shaving Source: http://imgur.com With the world becoming increasingly modernized, shaving has become a rushed process for many men. As it is ideal to use the fastest and easiest means to get rid of beards, most men do not notice that careless shaving causes damage to their faces. Wet shaving is a […]

Great Riches For Those Who Entertain [the_ad id=”1142″][the_ad id=”1473″] Professional wrestling has entertained us all for decades with colorful characters like Hulk Hogan, Brett hart and the Macho Man. These athletes gave us action, drama, humor and combat. Events like “Wrestlemania” thrilled us to the point that we spent hundreds of dollars on pay-per-view to […]

10 Books On Finance That You Must Read Source: http://tariqmarketing.com[the_ad id=”1142″][the_ad id=”1473″] The finance world has provided a backdrop of numerous dramas, from acquisitions, mergers and Tulip Mania to Wall Street shenanigans as well as the latest housing market downturn and subsequent financial crisis. Finance authors obviously never lack gripping topics to write about. [the_ad […]

There are some essential mens suits in life that every man needs to own in his closet, not just for the sake of variety. Typically, there are certain types of suit-wearing occasions in life, where only a particular style is required to make the right statement. From evening cocktail in elegant rooftop bars to high-powered […]